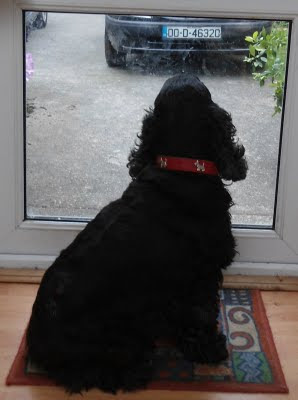 What is Dubh waiting for? Could it be next months Virtual Exhibition on Facebook? I have just finished the painting I was working on for the show.
Or is She looking at Eoin's new baby (car)? Which has managed to sneek into the photo, while my van is relegated to on-street parking.
I took Eoin out in his car this afternoon, or should I say he took me (He needs a qualified driver with him until he passes his test) Now instead of being Dad's Taxi, I am Eoin's passenger... whether he needs to get from A to B or not, he needs driving practice.
Dubh is not amused. Dog's are not allowed in Eoin's car so she gets left behind, even though she is the same colour and believes it is tailor made for her.
Posted by Unknown at 1:33 PM No comments:

I have been very busy recently. I've done a little bit of painting, but mainly some more work on the cottage in Sligo. Along with that I have been organising bits and pieces for next month. I have the Interprovincial championships (& Ireland team qualifier) in Killarney this weekend. So I have been tying up a few troutflies.
I hope be going to the opening of the AITO exhibition in Enniscorthy next week, then I travel to Cambridgeshire in England for the International trout fly competition as part of the Irish team.
Because of this my blog has been a little neglected.. sorry. On the other front I have had a couple of sales recently, so I'm a little happier with the costs of all my fishing trips. I bought my son Eoin a car for his birthday this week, it's not new but it is a car I know and it is well looked after with little mileage. I also managed to get a reasonable quote on his first years insurance... well there is no point buying him a car without insuring it for him ;) Students don't have a lot of money to spare.
Posted by Unknown at 6:48 AM 2 comments:

Where does time go? 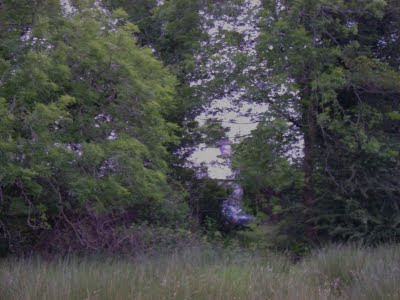 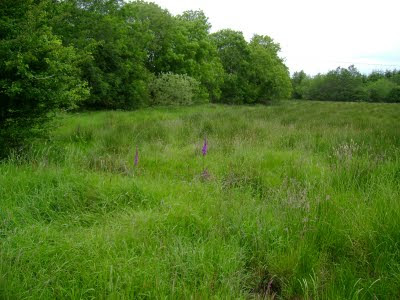 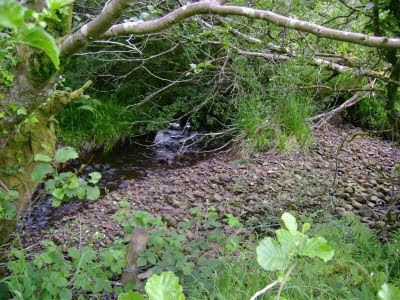 I can't believe it's two weeks since I last posted!
All I have managed to do is go up to our cottage in Co. Sligo. The lawn is unmown there.... and will be for a long time.
Although the grass has grown well in our meadow out front there was little water in the stream, until our last night when we had Lightening and thunder storms with very heavy downpours all night.
The following morning the stream was in full flood, and the ground was very wet so we cut our trip short and came home a day early.
I took a trip to Wexford to collect some of my art from the Art in the open exhibition . One of the paintings travelling on to the Public Library in Enniscorthy for a further show of some of the Enniscorthy paintings from the festival, which runs until mid-September.
I am now moving into fishing mode, with a little over a month before I set off for the International fly-fishing competition in England. I have a lot of bits and pieces to organise before then.
Posted by Unknown at 1:39 PM No comments: 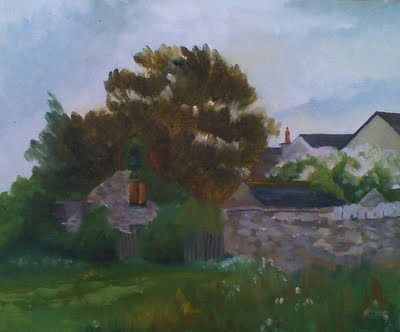 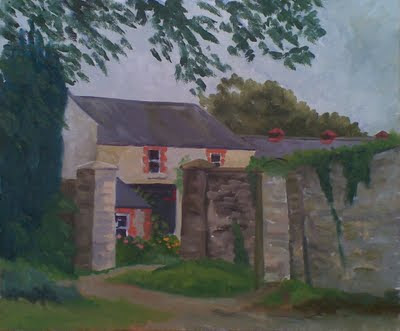 Here are the last two studies from the plein air paint-outs as part of the Art in the Open festival. The top painting is a study of an old semi ruined bell tower beside the bridge over the river Slaney in Bunclody. It is oil on panel and twelve inches by ten. I liked the half-hidden tree-house immediately behind the bell-tower. A number of passers-by seemed to be unaware of it nestling in the tree, until it was pointed out to them.
The second work is of what I took to be a Gardeners Cottage beside Newtownbarry house, just over the bridge from Bunclody. I painted this in the afternoon, and when finished took a walk around and down into the sunken garden. The garden is beautiful, and I'll upload some photographs of it later. I didn't have enough time to do a painting there, but I'll probably make another trip to the house again.
The festival is now over. I enjoyed participating and would recommend the festival to anyone thinking of taking part next year, and I'll probably be there again.
Now I'll have to get back to the studio and work on some re-working.
Posted by Unknown at 9:19 AM No comments:

I am just back from the exhibition opening in Greenacres Gallery in Wexford town.
I enjoyed painting plein air down in the not so sunny south east.
Here are a few of my plein air paintings from this week. 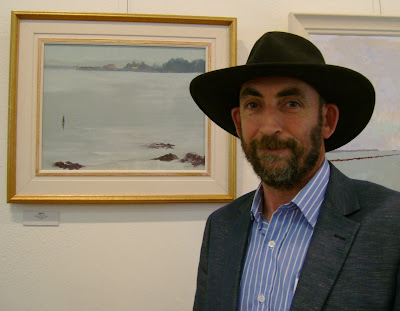 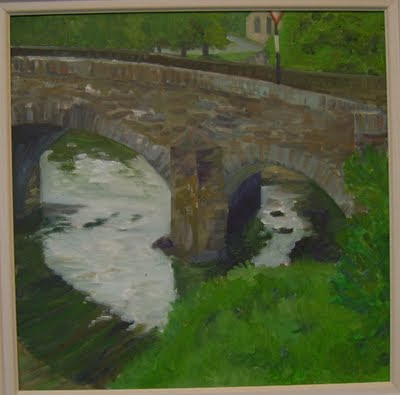 This is me, standing beside an early morning view up the river from Wexford bridge. 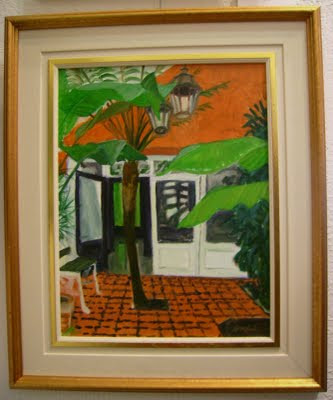 A painting of the bridge over the Slaney river in Enniscorthy.
I liked the abstract shape of this view. As can be seen from the palette, the day was quite grey and dull again.
My next painting is of the garden conservatory in the Riverview hotel in Wexford town, and although looking quite bright colour-wise, I was inside painting because of heavy rain outside.
Speaking of the Riverview Hotel, (apart from the fact that they allowed me inside with wet oil-paints on a busy Sunday) I was pleasantly surprised at the level of service and general cheerfullness of the staff there. It is a rare event to find such good old fashioned "family-run" style establishments now. Most hotels and restaurants seem only interested in taking your money, and not that you are having a good experience while there.
The final image is of a small knife painting I did of Poulaphouca reservoir, Blessington Co. Wicklow while painting with Don Maier last week. 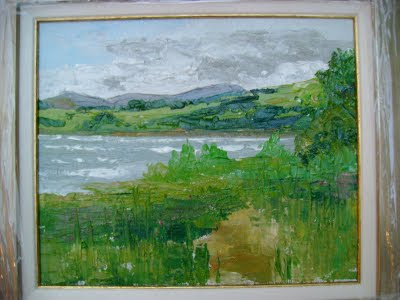