Update on my lino cut prints. 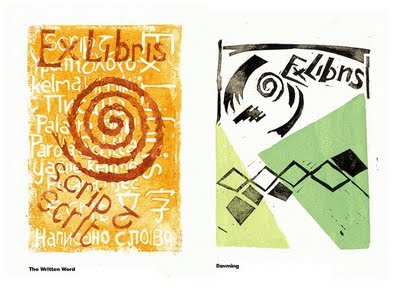 I finished the second ex-libris lino-cut, the one on the right obviously since I already posted the first one. I have sent them off to the Museum in Serbia, and now I can get back to my painting again.
I am still working on fish.. mainly sea bream, but I am nearly reaching the end of my journey with them. I may just finish off the works in progress and move on to something else.
If the weather improves I am still hoping to get some landscapes painted en-plien-air, to re-work over the winter. However this is less and less likely due to the inclement weather we have been having. This last month was the wettest August yet. We have had between 150% (east) and 250% (west) of normal August rainfall this year. Hopefully we may get an indian summer and a dry warm September so I can get out and about.
Posted by Unknown at 11:52 AM No comments:

My Ex-Libris print is ready for the impression stage. 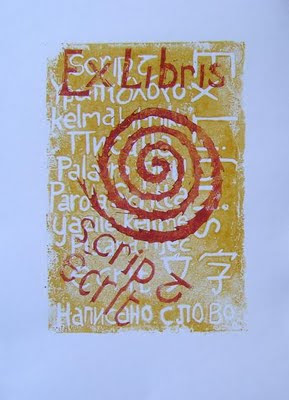 I have two draft print runs from my lino cut Ex Libris
The first is a two colour printing entitled The written word.

The background is made up of the written word in 11 languages.
The second layer is a design based on prehistoric writings and designs on some of our neolithic monuments, with script and ecrit reinforced. I opted for these as they are from the two most widely used western languages, English and French.
The second draft includes a third colour impression of a stylised quill pen. This was my intended design, but I think it is far too busy to work. For this reason I will probably go with just the two impression piece.
I have been using standard watercolour paint for the printing rather than the block printing watercolour 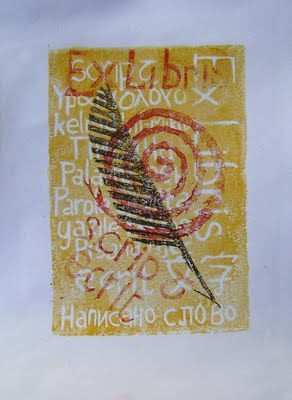 as I wanted to control the colour better. However I had a little problem with the
printing process when dampening the watercolour paper prior to impressing the lino-cut. (note the blurring on the second picture) I have used dry card for the two colour impression which seems to have worked better as far as a sharpness goes, however the edges have not come out clean in this one. I will try a varied level of dampness on the watercolour paper before deciding which paper to use for the final prints. I will also rework another design to send off, along with this one. I am more relaxed now that at least one is finished, as the second is not neccesary, but optional.
Posted by Unknown at 10:32 AM No comments:

I still need to work on my Ex-Libris prints. I am just not happy with them as they are. I hope they will be come together soon as I am leaving other work aside to carry on with them.

This is one reason why I haven't posted recently, as I am getting behind in my work. I hope to print the latest lino-cuts tommorrow, and hopefully I'll be happy with the effects. I will post photos when they are done. In the mean time, I'm off out this evening....lad's night out so I'll keep this short.
Posted by Unknown at 12:17 PM No comments:

I haven't posted for a while, I have been rather busy. Work is still progressing slowly, and I am stuck in a rut regarding my Ex-Libris print. I just can't be happy with what I have got, so I may have to rethink my ideas totally and time is getting short.
I have had to tidy my studio up today. I was trying to work and kept finding I had no space! I still have two glory hole corners that need sorting out, but at least I have enough room to work! m I have other commitments all next week so the art will have to wait, hopefully my ideas for the ex-libris will improve in the meantime.
Posted by Unknown at 9:20 AM No comments: