I was down at the 'Country retreat' earlier in the week, planting a few more fruit trees and some fruit bushes (currants and gooseberries) though the wildlife will probably eat most of these, (deer the shrubs and Birds the berries of any bushes that survive)  I also decided where to position my studio when I move it during the summer.  I have decided to pop it down here with a north facing view. 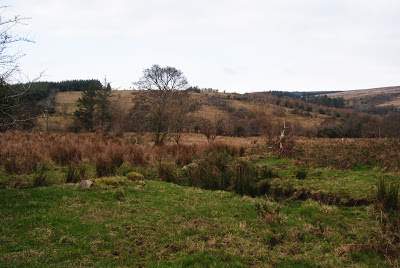 It will be about sixty yards from the cottage, far enough away to be 'at work' but close enough to pop home for a cup of tea.  There is a little spring running in front of it, in which I will create a couple of weirs to give me more sound from the water, I intend putting a pond in lower down, but that will be in front of the cottage to the left of this picture.  Some of our neighbours were particularly interested in what I was doing... but I don't expect they will really be bothered. 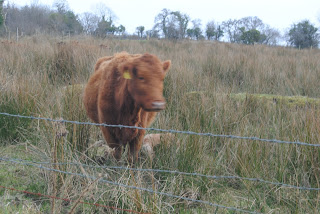 I decided to keep the Studio away from beside the stream as I wan't to create a walk alongside it rather than have the studio in view of the cottage.  Where I am putting it is hidden from the cottage until we walk up the Bohreen (small narrow road) as it will be screened by trees and hedging. 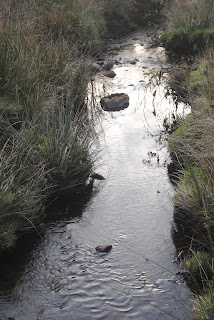 We are looking forward to our move to Sligo, and every little bit we accomplish leads us nearer, although there is still lots of work to be done.  At the moment doing it as we are, is a pleasure, and we are making our plans for the work more concrete as we go, because we are letting the feel of the cottage and land influence our descisions.  Most of our plans and research are now done, and we can start implementing them over the summer.  It will be a labour of love, assuming we get suitable weather this year, if it is as wet as last year work will be considerably slowed down.