Another Lino-cut goes off for display 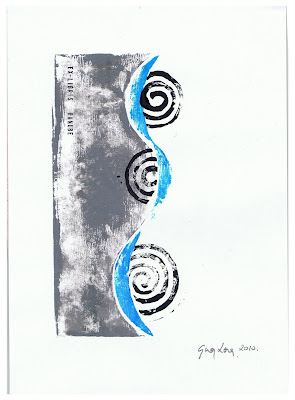 ex-libris lino cut print to the Third International Biennial Ex Libris Exhibition "Danube" 2010
at the Historical Archive of Pancevo, in Serbia.
It should have gone last week, but with the grounding of air traffic due to the Icelandic Volcano...no I'm not going to try and say/write the name of it...LOL....there was not point trying to send anything airmail...
The Lino-cut is a three colour print and it is based on the River Danube (the subject this exhibition) depicted by the sinuous blue curves down the center. The overall shape is heavily influenced by the Neolithic ceramic Donii figures. These are women with wide almost pear shaped hips, often depicted pregnant, celebrating the creation of life and thought of as Mother Earth. The river curves follow the line (left hand side) of the traditional womanly curves. These Donii were created in the neolithic era by the peoples living along the Danube Valley.
These curves representing the river are then highlighted with partial spirals, a neolithic form of decoration that is common between Ireland's neolithic culture and that of the Balkans and the Danube valley.
I have allowed the 'solid' grey to print unevenly, it is hand printed rather than with a press, to allow white paper show through. My intent to have the overall effect similar to stone rubbings that we get from our carved stone artifacts here. This ties my own heritage to the heritage of the Danube Valley and helps keep the work more personal.
I like this work for it's simplicity, but it has a simplicity that comes from much planning and work. An almost art-deco feel, but one that enfolds quite deep undertones celebrating the artistic heritage that has survived thousands of years, both along the Danube River and in my own area.
Now that I have this sent, and the airplanes are flying again, I have to try and get organised for our trip to the Cote D'Azure in the south of France.
Posted by Unknown at 11:04 AM No comments:

I haven't done much painting recently. I have been busy building a website for someone and struggling to get the garden in order before we go to Cannes later in the month. I have nearly done most of the clean-up work, and I'm almost finished planting tubs, boxes and baskets. All I need to do now is plant up some beds, lay a path that we can use to go to the pond and my studio, (the ground got rather muddy over this winter, mainly due to the extraordinary heavy rain early on.) and mow the grass again!

I am also trying to get an International Artists festival off the ground in South Dublin, so I have organised the first meeting, attended it and now I am preparing for our second meeting, which I hope will reach a consensus on what exactly we want the festival to encompass regarding different arts and arts practices. The idea in principle recieved a good response with a good number of artists and arts industry people willing to work toward it. It re-inforces the fact that there is a need for something like it in the area. The very fact that so many are of the same view, enough to give of their time and expertise in trying to make it work makes me glad I set the ball rolling. I am very concious not to dominate the discussions though, I found at the last meeting a few kept asking me for details about the proposed festival, which I had to stress was down to the whole group who are going to organise it. For this reason I have asked the group to come with proposals themselves at the next meeting, so we can discuss and decide as a group.
Fingers crossed it will go well, and we can get down to actually organising the funding and sponsorship.......
Posted by Unknown at 9:35 AM No comments:

Two works ready for re-working again, or I should say 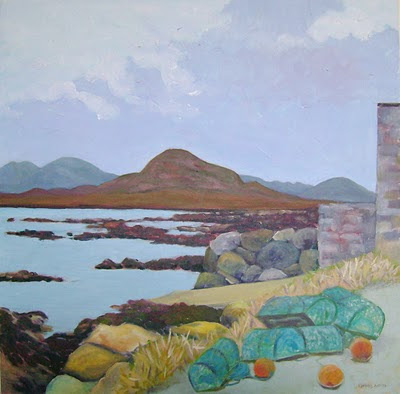 ready for the final work. The top piece is 50cm square, the lower 30cm. Both are Connemara studies/ painting plans. I really like the water area of the 1st painting, It is light and fresh. The rest of the piece needs composition changes and cleaning of the paintwork but it is of use as a beginning. There is enough in it that I'm interested in moving forward with the ideas.

Painting #2, may work as a larger piece but I think it is interesting in it's original size as is.
It is much simpler than much of my work, it is influenced by the solid blocks of colour I have been using when painting the fish. It was painted alla-prima, and reworked just in a small area. I am considering using the piece as a foundation for a larger, more complex painting, but using the more patterned block style. 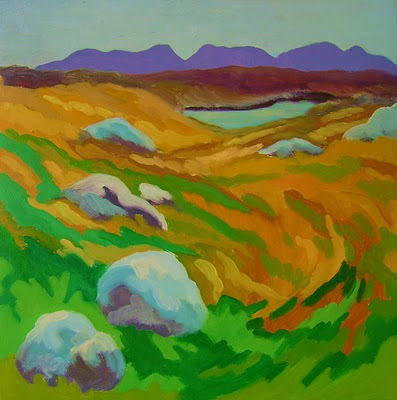 Posted by Unknown at 1:02 PM No comments: