Grasse, rework of a Plein Air study..Work in Progress

I have reworked the painting of Grasse, in Provence. I have 'made' a video of the process using the photos. I also want to give another commentary post, explaining the stages and my reasons for the changes made. 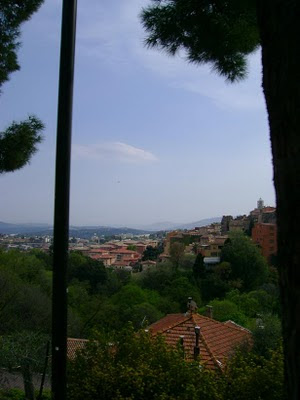 Here is a photograph of the view that I painted originally. 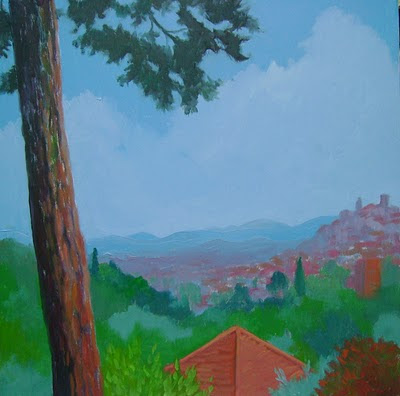 You will notice by the tree to the right of the photo that this plein air study was painted slightly to the right of the photograph. Both the tree and the roof angle are different. You will also notice that I simplified the buildings roof in the study as I didn't want too much detail to interfer with the landscape. Here is the advantage of painting studies, the landscape has become secondary to the line and character of the tree in the foreground. 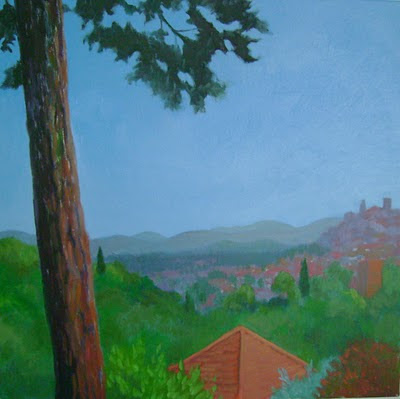 I have started by reworking the sky, overpainting the clouds and creating a gradient down the sky to create both distance and heat.
I then re-painted the tree-tops/trees in the foreground removing the cold tones to allow the trees to come further forward and the distant landscape to go back.
I warmed the distant mountains, and cooled and darkened the foothills, this creates further depth in the painting which originally was quite flat.


My next step was further rework of the foliage in the foreground, and I have painted in a rail fence, using the reference below

this was taken elsewhere in Grasse although close by to the site and is contemporary to the original view. 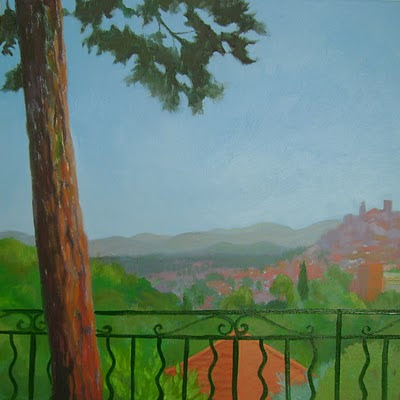 This includes removing the 'Red/Copper' foliage in the bottom right corner which both detracted from the main area of the landscape and allowed the painting to drift off the canvas.
The Cypres tree on the left was removed as it divided the painting into thirds with the one on the right. The tall building in the mid foreground has had the green area to it's right removed and a building painted in, sending it back into the town rather than allowing it to move too far forward into the trees.

The railings have been added to allow the pine tree to become the subject of the painting, as this was my favourite part of the study originally. These also help to separate the position of the easel (including the tree) from the rest of the painting, giving further depth, and perspective to the painting. 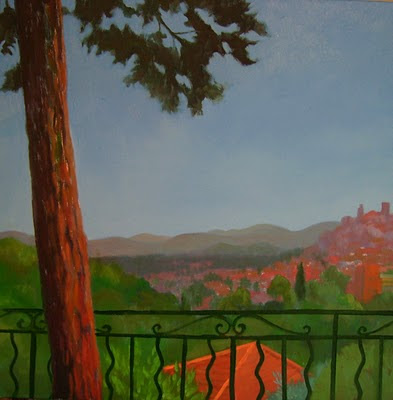 My next move was to reposition the roof line of the housebelow the roadway. Both lowering the pitch and moving the apex from the center of the painting. This improves the look of the roof and helps the balance and movement throughout the picture. 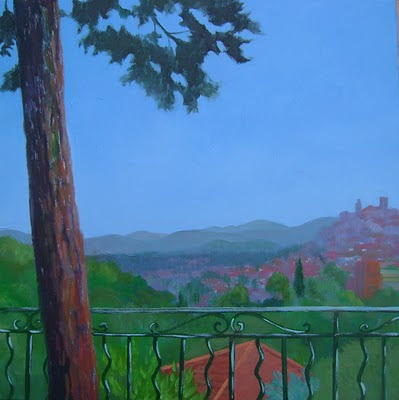 I then have added highlights to the railings in a pale green. I have reworked the foliage at the bottom right corner again, removing the curve look of the green shrub and adjusting the bluer folige to make it less stringy and more solid. I have not allowed the top rail of the fence to go all the way out of the left hand side of the painting, combined with the highlight colour and tone this has stopped it dividing the picture across the bottom. 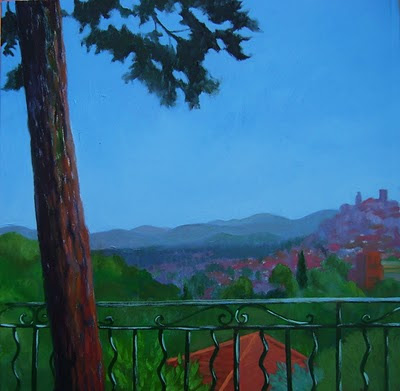 Finally I have added some of the sky blue into the highlights on the fence and left the work as finished. I have left the Pine tree as it is, painted loosely and direct. It is this freshness that makes the painting, the rest of the landscape is just background to the tree although still recognizable as Grasse.
Posted by Unknown at 10:08 AM No comments: Links to this post 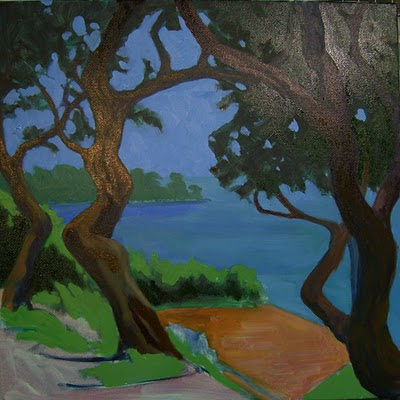 I have finished re-working this Plein air study from St. Marguerites Island in the Bay of Cannes, Cote D'Azur.
The couple of areas in this photo with a shine have already been started on. (I decided to photograph the work in progress after starting)
Starting from the base oil sketch, the composition is very busy, and the small branch to the left of the right hand tree is mimicking the center trunk giving a regimented and fragmented look to the work.
I have adjusted the curve on the right hand tree already, the dark blue of the original sketch is visible to the left of the reworked trunk. I have put a base coat on the small branch, which I am about to paint out next. I have also painted areas of the 3 tree trunks
and darkened the dark area behind 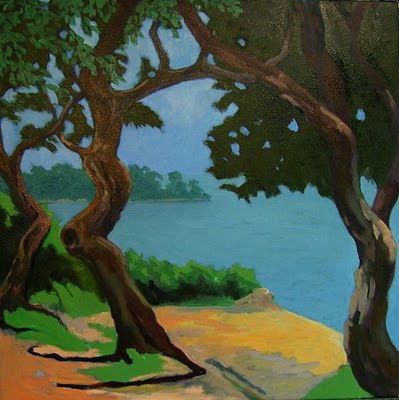 In photo two, I have done further work on the tree branches. There are areas of light added to some of them. I have also emphasised the curve and twist of the middle tree trunk.
I have painted some foliage in the foreground, top left, this adds depth to the painting.
I have greened up the main area of foliage to the back.
Second coats have been given to the two areas of ground under the trees. The little piece of wall has been painted out also, it does nothing for the composition and is not needed. The dark line of the old wall foundation on the other hand adds interest and does the secondary job of creating contrast to the strong line of the tree's roots on the surface of the ground. These roots make the trees more interesting.
The section of the Island in the background has been repainted. This has been cooled down and adjusted in tone to complement the newly painted sea and sky areas. 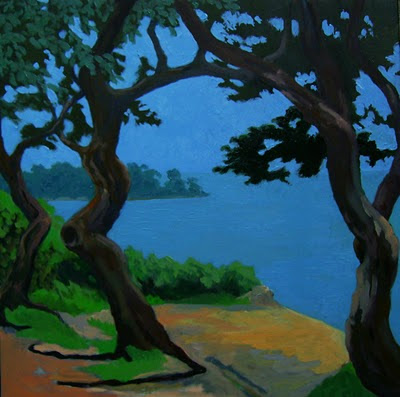 In the third photo I have reduced the area of foliage to the right hand side of the painting. This area was to square and also quartered the painting. I had a little fun with this part though...creating a little map of Ireland out of it....
I have left the basic square, but I have broken it up to make it less solid.
It has also allowed more of the horizon to be visible.
Although not noticable in the photograph there is a small variety in the colouring of the sea. This gives a pleasant vibration to flat blues of the background, and not just in the closeness of the colours in the sky to the sea itself. This has the effect of giving heat and life in what could have been a very flat and un-interesting area.
I have also created another curve and twist in the righthand tree trunk to give a better shape to the fork. Finally the foliage on ground and behind the trees has been re-worked and detail added.
I feel the painting is finished now. Though there is always a possibility I may see some change to make in a month or two. 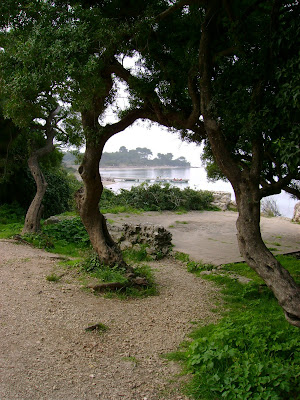 This last photo is of the view, though not the same angle, which was a little to the left I think. But it explains some of the changes made, and the original sketch.
Posted by Unknown at 11:57 AM 2 comments: Links to this post

It has been a cold grey day here today. I am already missing the warmth of the south of France. 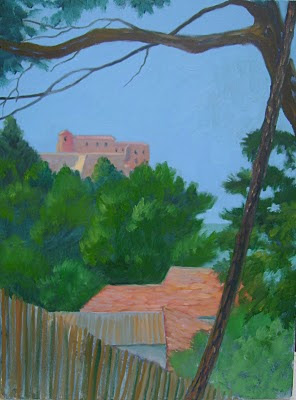 Here is one of the paintings from the Cote D'Azur, the fort on St. Marguerita's Island in the bay of Cannes. ( It will need a little re-working. )
It helps cheer me up... :)
The rain we have had has obviously brought the river into flood, the Heron has been in my garden pond today, trying to steal my goldfish. I don't mind herons normally, I see lots of them along the rivers when I am fishing, and I enjoy watching them fish themselves.. ...but I do object to them eating my pets!
Dubh is not a particularly good watchdog either, she will chase it off--after you have told her it's there in the garden. Well at least I don't have to Bark myself.............
It looks like we will have showery weather all week, with cloud and temperatures struggling to reach 10 degrees celcius. Summer must be here :(
Posted by Unknown at 12:18 PM No comments: Links to this post 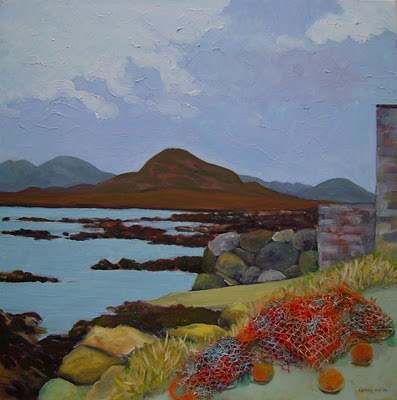 I replaced the lobster pots with nets. These are depicted with some orange and onion netting, glued down and painted on and over.
I also reworked some other areas of the painting, particularly the foreground area which I warmed up to increase the depth of the landscape.

The 3D effect of the scrap netting is interesting in itself. I managed to set the bright colours back with judicous use of paint. while still allowing the colour to come through, while the painterly effect on the plastic bouys still allows them to sit in the foreground while appearing to be three dimensional alongside the netting.
Posted by Unknown at 11:35 AM 2 comments: Links to this post

I have sent my van off for it's service and roadworthiness certificate. It has passed again, now it is being serviced. It is always a relief to know it passed the emmissions tests, etc. the van is like an old comfortable shoe, it just about drives itself. It is now 15 years old and I hope to get another decade at least with it. The tailgate is ideal for both fishing and painting, being that you can stand under it when it is open and work/change/paint out of the rain. A bit like an oversized umbrella.
The large back in the van serves as storage for all of my fishing gear, my full-size radial studio easel fits in comfortably....much better that the lighter sketching easels for larger plien air works. Numerous wet canvases can be laid out in the back.. ...in short I'd be lost without it.
Posted by Unknown at 6:12 AM No comments: Links to this post

I am back from my travels 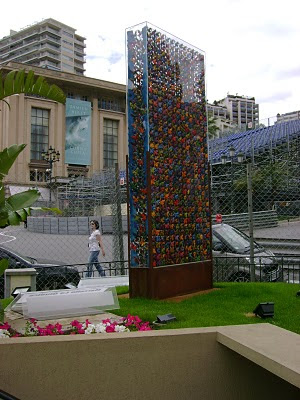 I am back from the CoteD'Azur in the south of France. We stayed in Cannes, but travelled around quite a bit. Up the coast as far as Monaco, and up into P 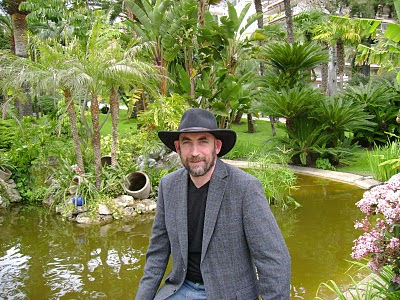 rovence. There were many artworks on display outdoors in Montecarlo.
These were a little bit spoiled by the groundworks in progress for the F1 Grand Prix. We always seem to go to Monaco when these eyesores (wire fencing and Barriers) are in place.
I much preferred the quiet and calm of St Marguerita Island, just off the coast at Cannes. This Island is the site of the Fort in which the 'Man in the Iron Mask' was held prisoner.
Later in the week we took a trip inland and travelled to Grasse, in Provence where we visited the Perfume Museum. 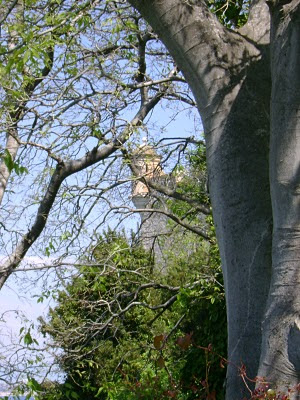 This trip we did not get into any of the museums of art, although I had intended visiting the Renoir museum in Antibes. There is only so much you can do in a week, and there is still much for us to return for another time. I hope to stay and do a little painting around Le Cannet too, where Pierre Bonnard did much of his work.
Now I'm home again, I have much work to do. The grass has been growing extra fast while I was gone...
....I think the dog will nearly get lost in the hay-meadow out in the back garden! and she needs a haircut too, just like the lawn.
Oh well! I should get into the studio about mid-week, I have to take my van for it's annual Roadworthiness test on Tuesday. I am assuming it will pass.. and it is getting a service too.
It is a pity the weather has cooled down again here though. I enjoyed the Sun and the heat in France last week, 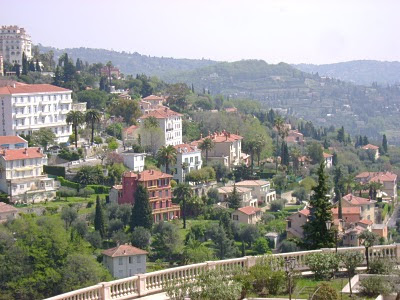 Posted by Unknown at 2:54 PM No comments: Links to this post