I have been busy the last week or so. Even so I haven't really got that much news. I need to frame and ship a couple of prints for the Ex-libris, but apart from that I'm just painting away working on a few ideas and waiting for the weather to improve so I can start a few landscapes. I may take a trip down the country next week, but I have a couple of Fishing competitions in the next fortnight, so I will be busy with them too. Of course I've had a couple of days out this week too.....
Posted by Unknown at 2:50 AM No comments: 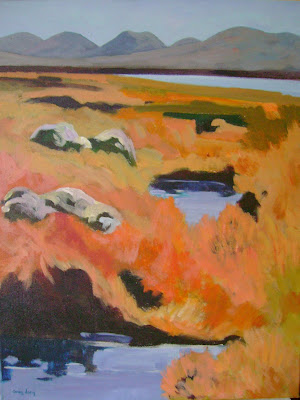 Here are two recent works, the first is a view of Connemara. Acrylic on canvas, 18 by 14 inches.

The dry dead foliage gives the landscape a warm feel with any sunshine. The light picks up the reds and ochres of the dormant foliage, while the pools of water amongst the bog sparkle with light. The reflections in the puddles and pools give a contrasing coolness to the warmth of the landscape.

More details of the paintings can be found on my website . 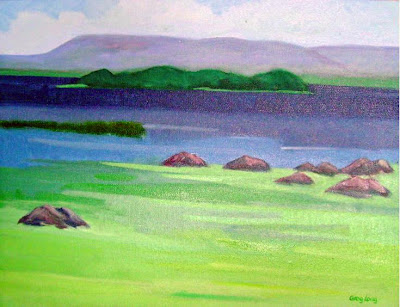 The second painting is an oil on canvas, of the same dimensions and is a painting of Lough Carra in County Mayo. I like the oil painting particularly, as it gives the feeling of calm that this particular lough gives. Lough Carra is the smallest of the western lakes at 4000 acres. It is an intricate Lough with many bays and points. A clear lake it is the safest of the western lakes, and rarely gets the rough waves the others can experience. The light limestone marl gives the shorelines the characteristic 'white' shallows, dropping off into deep dark water. It is along these edges the best of the trout fishing is found. This second painting is also on my website and is available to buy direct.
Posted by Unknown at 3:35 AM No comments:

I am back from Lahinch, the gallery have my new paintings for the exhibition. It is due to open on Easter Monday. There will be four small seascapes and four landscapes on show. The trip was a long one, not helped by a small detour.....un-intentional one, due to the navigator sending me the wrong way at a juction while taking a new route. I am well rested now though, my eyes were very sore this morning, due to the de-misting air coming up into my eyes all the while when driving. With the damp weather, the van windscreen was misting up if I turned the hot air fan off. I am going to take the weekend off now, no more work until Tuesday, Monday being St. Patrick's day.
We party this weekend......
Posted by Unknown at 3:30 PM No comments:

All prepared at last!

All my paintings are ready for the exhibition, I just need to wrap and pack for transport. I will have an early start tomorrow. It is a long drive down, and It will probably be a fourteen to sixteen hour day in total. The paintings look very good in the frames, that final finishing off makes a big difference.
I can honestly say I am pleased with the works going to the show. If they don't sell well I will be extremely surprised!. The subject matter is a good one for the area, and even if I say it myself the work is 100%, both artistically and for uniqueness.
Posted by Unknown at 12:29 AM No comments:

Organising for an exhibition, and considering a painting studio sale..

I have been selecting some paintings for a show from the stacks in my studio. I am seriously considering holding a "Studio sale" later in the year. I have so much stuff to clear out of the studio. Small works and studies I have been holding on to for later re-use or repainting were easily stored in my old studio as I had plenty of space. My new studio however is a different story, I just don't have the same storage. I am due to do an art fair in the summer, but even so I have more than enough work done for it.
I may have an online studio clearance about April, I don't particularly want to frame them for an exhibition, and I can't use my studio as an open studio to sell them either, it is too small for that.
I have to take the paintings to Clare next week, the gallery down there wants 5 or 6 works for thier Easter Group show. I have just finished phoning my framer, I need a couple of the pieces framed in a hurry......as usual he will oblige. :) I forgot Easter was so early this year. Time is flying by........ I hope to get a few sales from the show, the Gallery does quite well, and Easter is a good time for sales as the area gets a large amount of tourist traffic, as does the gallery. If I take a couple of smaller works (24 inches and under) they usually sell quickly, although the big pieces can sell, but I prefer to keep those for one man, or major shows with lots of space available to display. In a group show situation the gallery can only allocate a certain amount of space to each of thier Artists, so larger works mean less paintings displayed for sale.
Posted by Unknown at 6:55 AM No comments:

I haven't been doing much work these last few days, but I did come across this on youtube...

Posted by Unknown at 4:04 PM No comments: